"For the glory of Polish pilots and astronauts"

Wołów is the hometown of General Mirosław Hermaszewski, the first and so far one Polish astronaut, who in 1976 together with Piotr Klimuk took a flight on the Soyuz 30 ship. The monument - the plane is a commemoration of this event.

In Wołów at ul. Trzebnicka in 1985 erected an unusual monument not of stone, not of marble, but the plane on which General Mirosław Hermaszewski flew airman and the first Polish astronaut. The monument was unveiled on the occasion of the 700th anniversary of granting city rights and dedicated to Polish pilots and astronauts. Mig Mirosław Hermaszewski's plane did not fly anymore, it was used only for training purposes. However, it had a working engine and armament, which was removed for safety reasons. However, Russian navigation devices, a chair with a catapult and a parachute, and compressor turbines were left. A Lim-5P (MiG-17PF) aircraft was mounted on a special frame. At night, the plane is illuminated and gives the impression that a pilot was sitting at the controls, who would soon rise into the air. The monument - a plane standing near the Książ Castle in Wołów, was created on the initiative of activists of the Patriotic Council of National Salvation. In 2011, councilors of the City Council awarded the General with the title of Honorary Citizen of the City of Wołów. In 2014, one of the most characteristic monuments in our city underwent a renovation process. The plane was cleaned of old coatings and then re-varnished. The aircraft numbers and side markings have been refreshed. 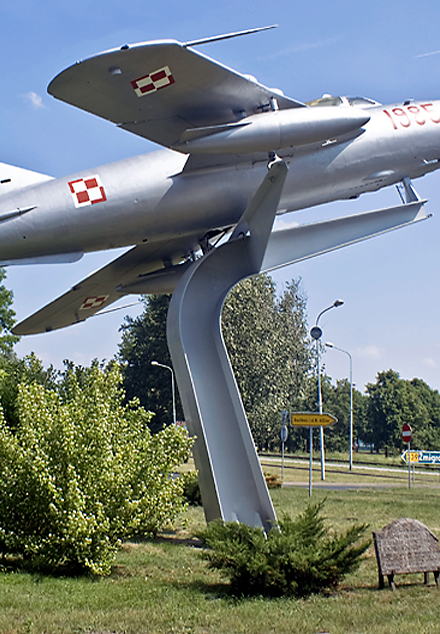