Wawrzyniec is the patron saint of Gołańcza and the local church. One of the most famous saints in the Catholic Church. His cult actually began shortly after his martyrdom. A temple dedicated to him existed in Gołańcza from 1361, and the monument was thought of here for centuries.

The construction of the monument became possible only after Poland regained independence in 1918. The local City Council passed the resolution to build the figure in September 1923. Finally, the two-meter-high sandstone sculpture of Saint Lawrence was carved by Marcin Rożek - the same outstanding sculptor who made the statue of Christ the King in Poznań and Bolesław the Brave in front of the Gniezno cathedral. Saint Lawrence stood here for the first time and was consecrated on August 9, 1925.

When World War II began, the Germans destroyed the monument. His fate over the years was unknown. It was not until the 600th anniversary of the city, i.e. at the end of the 20th century, that it turned out that part of the broken figure of the saint was kept in the local church. Then the decision was made to restore the monument. The reconstruction of the figure was undertaken by Danuta and Jarosław Jaskolak's company from Poznań, which specializes in the restoration of sculptures, and the granite and sandstone pedestal was made by Benedykt Kubiak's company from Gołanka. The works were financially supported by the voivodeship, poviat, inhabitants and local entrepreneurs. 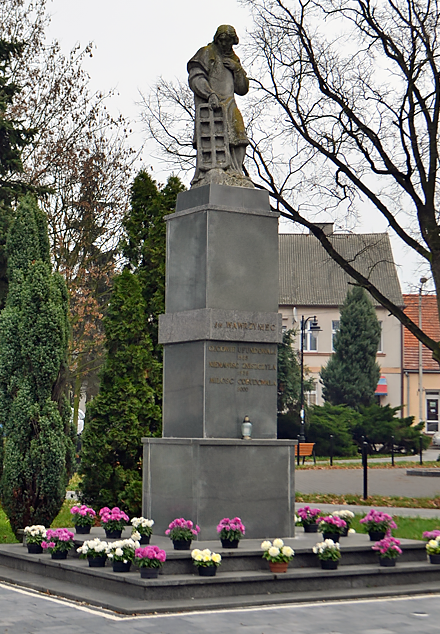