The Lewinska Gate is part of the complex defense complex of Grodków. The walls made of erratic stone began to be built in the years 1296-1301, i.e. shortly after the city was founded. It happened during the reign of the prince of Świdnica, Bolek I.

In the mid-fourteenth century, at the request of the bishop of Wrocław, Przecław from Pogorzela, they were additionally extended and strengthened. It was then that this beautiful gate was built, and the walls were surrounded by a moat. The gate is located in the eastern part of the city, at ul. Józef Elsner. It was built of brick with a Polish layout and was plastered during the Renaissance. The border of the passage and the corners of the tower are decorated with rustication. In the western façade there is a high, pointed blende. There was a harrow in it, i.e. a wooden grate that closed the entrance to the gate. In the Middle Ages, it was usually raised and lowered by a special crane. Interestingly, the harrow, reconstructed during the renovation in 2009, can also be seen today. 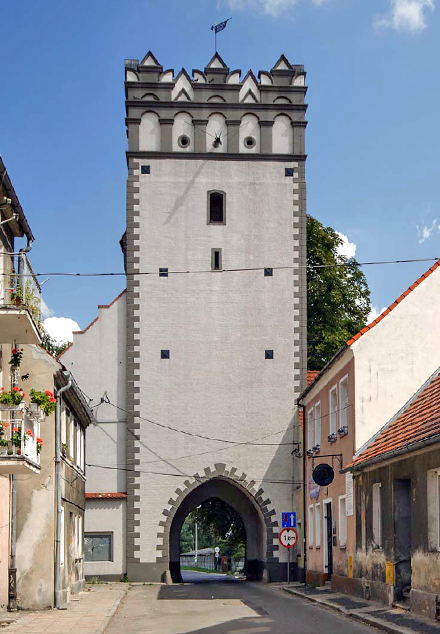