Church of st. Michael the Archangel

St. Michael the Archangel is almost as old as Grodków. It was mentioned in documents as early as 1282, and the city was located only 14 years earlier. At that time, its patron was still the Blessed Virgin Mary.

The early Gothic presbytery of the church comes from this time. Its founder was most likely Prince Henry IV Probus or the founder of the town, Komes Mroczko of Pogorzelów.

It was built as a three-nave, oriented basilica. The temple is made of brick, with buttresses, with pointed-arched window openings, in which there are reconstructed traceries - i.e. decorative patterns in the upper part of the window, and beautiful stained glass windows. From the west, a massive four-sided tower is added to the nave.

The remains of the Gothic interior design are the sedillia, a place for liturgical service, and the wall tabernacle with the date 1522. Currently, you can admire them partially reconstructed. In addition, the church has Renaissance and Baroque furnishings from the 17th century - including the organ front and the painting of the Allegory of the Church and the Sacraments. The late-baroque main altar was made in 1728 by the sculptor Michael Kössler from Swaben, the painter Melchior Franziskus Ansi, and also ... the grandfather of the Grodek composer Józef Elsner. In the southern aisle, there is a beautiful Renaissance triptych from 1600. It shows the scene of adoration in the middle field, the Annunciation and adoration of the Magi, and the Visitation and Circumcision in the side fields. A set of tombstones and epitaphs has also been preserved in the church. The oldest, late gothic, dates from 1513.

It is impossible not to mention the church organs, because they are the pride of the parish. Originally built in 1596, however, they suffered from lightning strike half a century later. Along with the reconstruction of the church, new organs were created. The instrument had a Hauptwerk and pedal section, and the playing organist sat with his back to the aisle.

The changes also forced tragedies. One of them was the great fire of 1449. During repairs, the walls of the chancel were raised, adding an additional storey illuminated by its own windows. Another major reconstruction took place around 1671. This time the Thirty Years' War contributed to it. At that time, among others, vaults in the nave were established. It is worth mentioning that the renovation of the church was possible thanks to the efforts of Bishop Sebastian Rostock. He is a native inhabitant of Grodków, who not only became the bishop of Wrocław, but was also awarded the honorable function of the general starost of Silesia. In 1893 there was a renovation and partial regothization of the temple. The ribs of the nave vault and some of the window traceries were renovated. 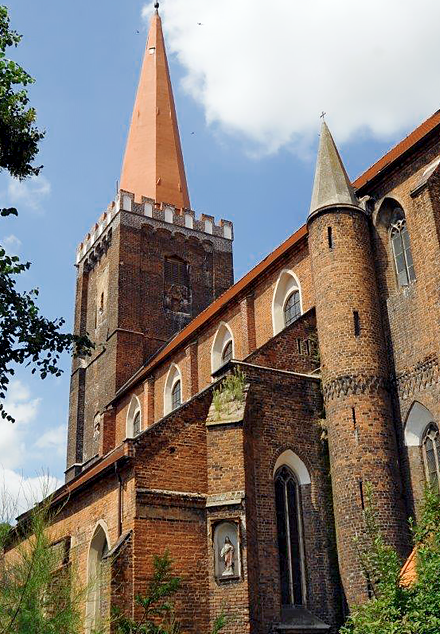 Church of st. Michael the Archangel