Almost every tourist starts his city tour from the historic town hall. No wonder, because it is the representative building of Grodków. It is situated in the center of the rectangular, revitalized market square, in the center of the Old Town layout. It is distinguished by its C-shaped projection and a beautiful tower.

The first seat of the Grodków authorities was established at the turn of the 14th and 15th centuries. Around 1350, only the town tower was built. A little later: the building of the municipal authorities and commercial buildings. Relics of that period have survived in the walls of the present town hall, they are especially visible in the cellars.

After numerous reconstructions, the town hall became a prestigious building in the 18th century and a kind of showcase of the city. It housed a beautiful hall for city councilors, a hall and an office, under these rooms there was a courtroom, the excise duty office and the "Świdnica cellar" where beer was served. The brick tower was impressive with a beautiful clock. Next to it, there were two larger buildings with shoe, meat and bread benches, a fire station and a garrison riding school.

Unfortunately, on June 24, 1833, a tragedy occurred. The largest fire in the history of the city broke out in the vicinity of the Ziębicka Gate. It took only five hours for the city to crumble. The wooden structure of the tower burned down, and the clock and bells suffered a lot of damage. The fire destroyed the point and the ball on the tower, only the walls up to the battlement remained.

The entire building was suitable for major reconstruction and the authorities had to decide on one of the several architectural designs presented. The designer, Philippi from Opole, presented the best offer. He proposed a construction project, which was immediately approved by the magistrate. It was according to him that today's town hall was built. 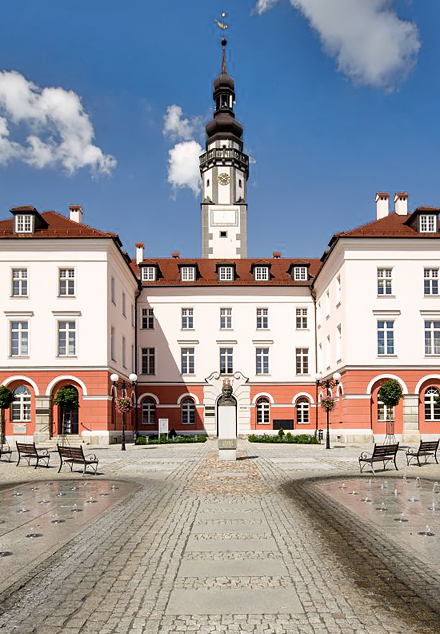