When he wanted to confess - despite high church distinctions he stood in a queue for the confessional with the faithful; at the hairdresser he was waiting his turn. For many years he drove the P 70 car, the predecessor of Trabant.

Bishop Jop came from the Świętokrzyskie region. Before he came to Opole, he was auxiliary bishop in Sandomierz and vicar capitular of the Archdiocese of Kraków. For the first time he was appointed as a steward of a part of the Archdiocese of Wrocław with headquarters in Opole in 1951. However, he could not assume this service at that time, because the communist authorities of the time opposed it.
Finally, he received the nomination decree in 1956, and became the first ordinary ordinary of the Opole diocese in 1972. At the beginning, the clergy and the faithful from our region approached this nomination cautiously. Bishop Jop felt the same way. However, he quickly won over the inhabitants of Opole Silesia. He always cared for respect for all inhabitants of the Opole diocese, regardless of their origin, he understood the multiculturalism and the complicated history of the region.
The crypt in which the coffin with the body of Bishop Franciszek Jop rested, using modern techniques, was opened and thoroughly examined forty years after his death in 2016. This is one of the four crypts discovered and thoroughly researched so far, located under the floor of the Opole collegiate church. 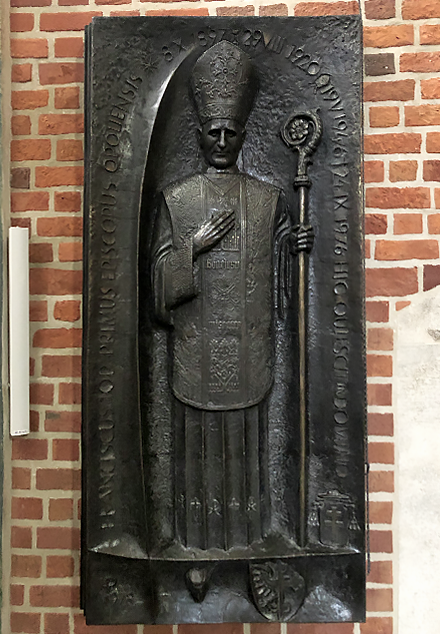