Chapel of St. John of Nepomuk

Born in 1350 in the Czech Nepomuk near Pilsen, the priest, was a canon in the cathedral of St. Wit, Wacław and Wojciech at Prague's Prague Castle and confessor to Queen Zofia Bavarian.

According to Catholics, Nepomucen is to protect against rough waters and flooding, and on the other hand - against drought. That is why his figures, called nepomukami, were for many centuries placed over waters, near bridges, fields or at road intersections, but also on public and church squares. The baroque figure of the saint stands, among others on the cathedral square, at the presbytery.
Nepomuki is easy to recognize by several attributes: the stars already mentioned around the head of the saint, finger on the lips, a closed book or padlock symbolizing silence or held in the hands of a crucifix or martyr's palm. Saint is the patron of priests, rafters, bridge builders, millers, as well as people wrongly judged and slandered.
The canon was beatified only in 1721 by Pope Innocent XIII, and canonized on March 19, 1729 by Benedict XIII. His Catholic liturgical memorial is celebrated on May 21. In the Opole Cathedral, he is the patron of the confession chapel, recently renovated as part of the Polish-Czech project, by the cathedral parishes of the dioceses of Opole and Ostrava-Opava.
Until recently, there was a historic baptismal font with the oldest coat of arms of Opole. During conservation work, however, it was moved to the left nave of the church, and an interesting discovery was made in the chapel. Under the floor, in the basement, a brick octagon, i.e. an octagonal building, was built up with bricks. Look carefully under the feet, because to commemorate this discovery the outline of an octogon was marked on it. It could have been an open baptismal font, a well, or a tomb - we can certainly never find out ... 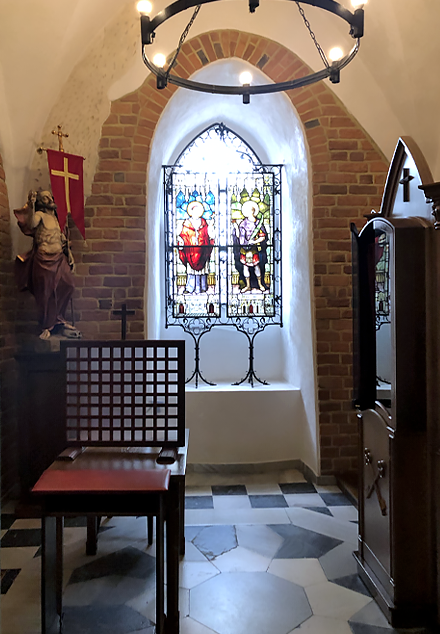 Chapel of St. John of Nepomuk