Six temples in Opole and around the city; three hospitals and an old people's home with a hospital for the mentally ill for children and adults - he built so many sacred buildings and facilities over the past three decades as priest of the cathedral parish, Fr. Monsignor Józef Kubis.

Father Kubis was born in 1874 in Proszów, near Namysłów in the Opole region. He studied in Friborg and Wrocław. He was a pastor in the Opole temple from 1917 to 1945. When Fr Kubis was sent to Opole, the parish of the Exaltation of the Holy Cross covered the area of ​​15 surrounding villages. In total, it had about 37,000 faithful. It is no wonder that the church authorities decided to build more temples. And they entrusted this task to priest Kubis, who turned out to be a great organizer and performer of the tasks entrusted to him.
Ks. Kubis was also very entrepreneurial! To carry out and finance all these investments, he would involve his parishioners and distribute bricks in the form of postcards or plaster casts.
In the cathedral itself, organs were built during his time. The former marble altar, dedicated to Our Lady of Opole, was also changed to a new, neo-Baroque one, which was brought from Jelenia Góra in 1927. Thanks to the efforts of Father Kubis, the painting famous for its favors has also been restored.
Prelate Kubis died due to illness on May 6, 1945 in Prószków, where he was buried. Undoubtedly, as an outstanding pastor, he permanently entered the history of the city and diocese. 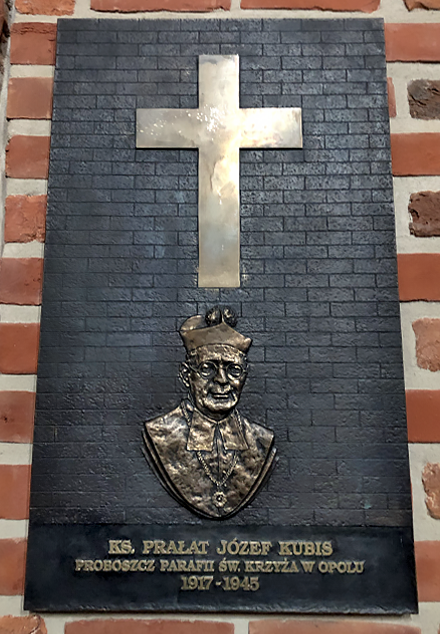