Wooden, historic, parish Roman Catholic temple from the early eighteenth century. The church is famous for its polychrome depicting "Bierdzian death". The paintings were searched for years. The temple was founded in 1711 on the site of an older one, mentioned at the end of the fourteenth century.

The church is a model example of a log construction often used in religious buildings of the 17th and 18th centuries.
The polychromes decorating the walls of the temple deserve special attention. The paintings were discovered in the early 1960s thanks to the persistence of the then new priest. This so-called Bible pauperum, a drawing version of the Bible for the poor who could not read.
During the discovery of polychrome, however, a particular search was made for the form of death that was associated with the legend and the saying "Będzin death" repeated for years, which was supposed to mean a weak, pale and sick person. This saying was to be related to sculpture, painting or painting in the church. The scene depicting death and the merchant was found at the very end of the work, which was financed mainly by the local community, which - also - was actively involved in the renovation of a unique temple. 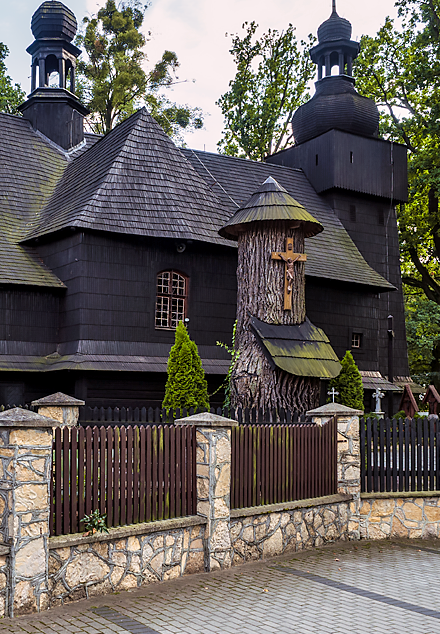