Church and calvary in Radawie

The first mentions of the church in Radaw date back to 1500. But in fact the temple was supposed to exist in this place as early as 1305. Today, apart from the church, there is also a Calvary in the town, where masses are celebrated in the open air.

The present baroque church dates from the 18th century. Over the next decades, it was rebuilt several times. Its furnishings and decorations come mostly from the 19th century. The main altar painting - entitled "Elevation of the Holy Cross" - was created in 1842. The organs come from the 18th century, the crucifix from the 18th-19th century and the baptismal font - with the sculpture of the baptism in Jordan - from the first half of the nineteenth century, the church is single-nave, carcass construction. It is one of nearly 70 wooden churches scattered throughout the Opole region on the Wooden Sacred Building Trail.
On the other hand, Kalwaria Marianska in Radawie is a place of religious worship that was established in the years 1996–2003, at the stop of pilgrimage of the Diocese of Legnica to Jasna Góra. It is surrounded by statues of saints. There are monuments of Our Lady of Salvation, John Paul II, Maximilian Kolbe, Father Pio, John the Baptist, Archangel Michael, Brother Albert and blessed Karolina Kózkówna. Today, it is a place of open-air services with an unusual atmosphere. 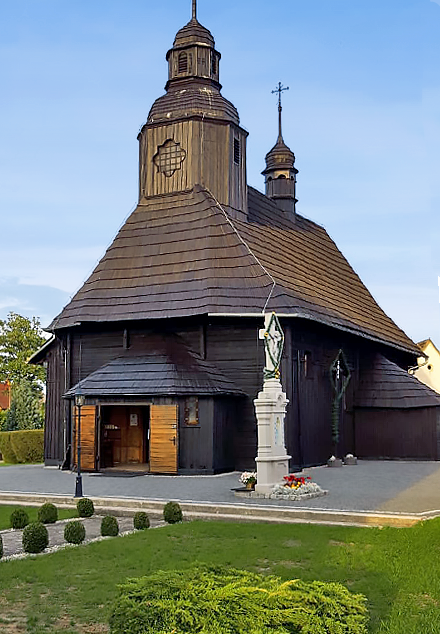 Church and calvary in Radawie