Near the picturesque, meandering with zigzags in the thicket of vegetation of the Mała Panew River there is a pearl of architecture - a hunting castle.

It was built of brick on the basis of the so-called half-timbered house. It is a two-story building, plastered and covered with high hip roofs. The complex body is decorated with numerous projections, tops and verandas. The whole is dominated by a hexagonal tower.
The castle - among the evergreen forests, with an age-old stand, whose area until the end of the 18th century was a forest remembering the hunting times of the Silesian Piasts - was built by Count Andreas Renard, the first owner of the smelter in Zawadzkie. It was located in the heart of the forest reserve, called the "Forest Zwierzyniec" ("Tiergarden").
The largest representatives of noble families from Upper Silesia once met here: Prince Hohenlohe, Prince Pless, counts Schaffgotsch and von Donnersmarck, count Frankenberg, von Zawadzky and the owner of Moszna, Thiele-Winckler. The last German emperor and King of Prussia, Wilhelm II, also visited here, and during the Second World War, the great hunter of the Third Reich, Herman Goering, reportedly devoted himself to his passion.
An important moment in the history of the castle was 1910. Then it was bought by Count Tiele - Winckler from Pszczyna - the owner of many land estates and buildings, including the palace in Moszna. Most likely, it was this count ordered to rebuild it in a style similar to the famous palace in Moszna.
After World War II, the monument was nationalized. In 1953, the hunting castle and the garden became the property of the Religious Congregation of the School Sisters de Notre Dame.
On January 1, 1976, the history of the Nursing Home began, which continues to this day. 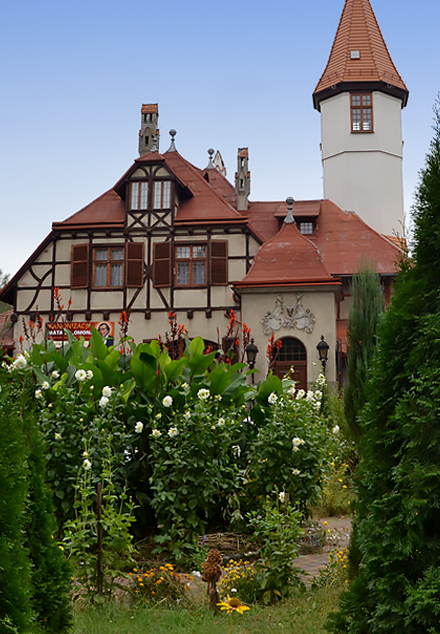